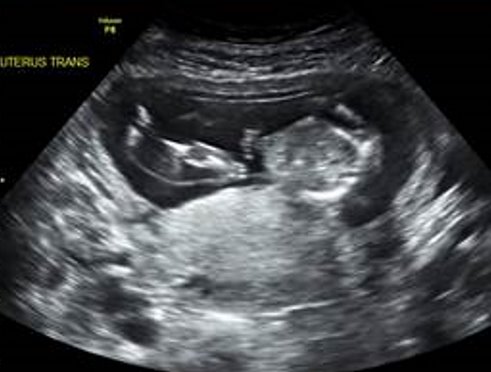 Zana came to a Pre-Born! Pregnancy Clinic knowing she was pregnant. She had recently been diagnosed with an autoimmune disease and her morning sickness was unbearable. She thought abortion seemed like her best option.

Zana’s ultrasound revealed a 7 weeks and 3 days old baby, but she still left the clinic undecided. Sadly, she didn’t keep her followup appointment and stopped responding to texts from the clinic.

The Pre-Born! Pregnancy Clinic continued to pray for Zana but they feared that Zana had probably already gone through with her plan to abort.

Several months later, Zana called saying she was still pregnant. She said she had an appointment for an abortion the next day.

“I’m so emotional,” she said. “Even though I haven’t had an abortion, I’m already feeling guilt and shame.”

The phone volunteer encouraged Zana to come back to the clinic for another ultrasound. When the image of her 14-week-old preborn baby showed on the screen, Zana began to cry. “I can’t abort this baby. I have even picked out a name if it’s a girl.”

Join us in praising God for saving Zana’s baby and giving her the courage to choose life!

By: Heather Gasaway|Stories of Hope, Uncategorized