Pre-Born!’s Response to a Post-Roe America 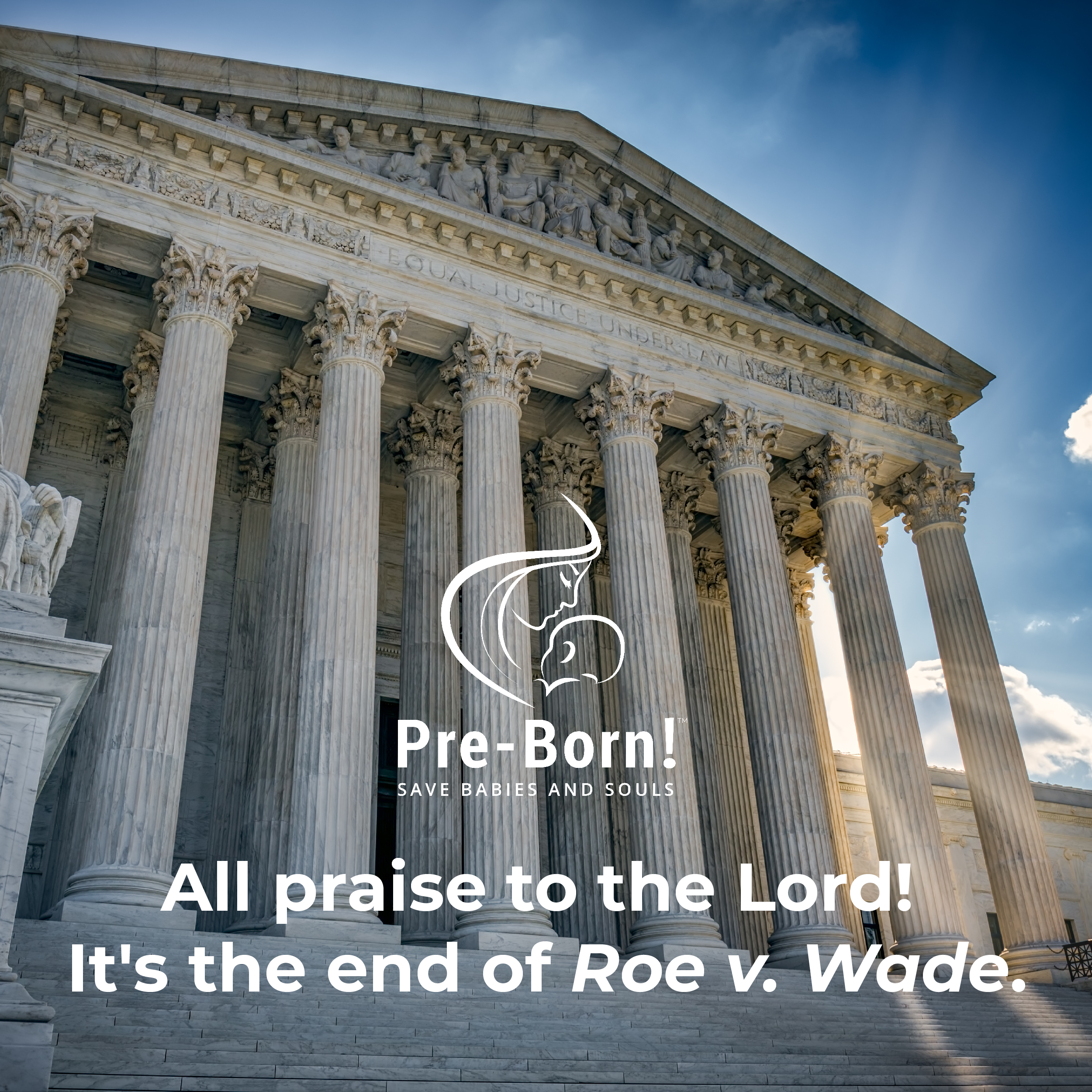 Pre-Born!’s Response to a Post-Roe America

All thanks be to the Lord for His overturning of Roe v. Wade. For the past 49 years, Roe v. Wade has led to the slaughter of 63 million preborn babies from the abortion cases that are known.

Thank you for being part of God’s history. Your love is a wonderful reflection of the Lord’s heart for the many millions of babies that have been affected by the egregious act of injustice called abortion. Today, the Lord showed Himself mighty and proved Himself powerful as the Father to the fatherless and defender of the weak.

Think about the potential fathers, mothers, sons, daughters, grandchildren, aunts, uncles, and cousins lost due to abortion. What of the potential geniuses, doctors, scientists, electricians, plumbers, roofers, preachers, missionaries, and so many other vocations that could have been filled if these preborn babies were allowed to live?

This truly is the cost of abortion. Lives that were extinguished before they even had a chance; lives robbed of opportunity, and even more so, the opportunity to one day choose life for their own baby.

In 2018, the state of Mississippi passed a law that would effectively ban most abortion procedures after the first fifteen weeks of pregnancy. Soon after, in Dobbs v. Jackson Women’s Health Organization, a lower court ruled against this law, arguing against the constitutionality of such a ban on abortion.

Mississippi appealed this decision to the Supreme Court and in December 2021, the Court heard oral arguments for the case.

The Supreme Court has now ruled that states have the right to decide for themselves the legalities of abortion.  No longer is there a federal mandate handed down from the Supreme Court, as there was with Roe v. Wade in 1973. The power of self-governance has been returned to the states.

What Has Changed with Abortion in the US?

Some states have laws that went into effect the moment Roe v. Wade was overturned, called “trigger laws,” while others will have to wait several weeks before abortion is halted in their state.

For example, a law in Kentucky made abortion illegal once the SCOTUS overturned Roe v. Wade, but in Tennessee, they’ll have to wait 30 days following the decision before abortion is overturned.

Florida recently passed a law that bans abortion after the first 15 weeks of pregnancy, except in the case of two physicians confirming, in writing, that pregnancy poses a threat to the mother’s life, or that a fatal fetal abnormality is detected.

Ron DeSantis, governor of Florida, said, “Our bill protects unborn babies from abortion after 15 weeks – these are babies with beating hearts, who can move, taste, see and feel pain.”

While several states have enacted laws to criminalize abortion or severely restrict them, other states may loosen their laws, even to the point of allowing women from one state to drive to another for an abortion. That will enable women from across the country to travel and acquire abortions from early pregnancy to late-term pregnancy, some of which are offered to them for free.

For example, a recently proposed amendment to California’s constitution was fast-tracked through not one, but two, legislative committees. This amendment, which will go before voters, will prohibit the state from interfering with or denying abortion and contraceptives in any manner.

Corporations such as Levi Strauss & Co., Amazon, Apple, Microsoft, Citigroup, Salesforce, and many others will provide benefits that help to cover the costs of abortion for women who live in a state where it may be against the law.

Effectively, these corporations wish to fuel what would be termed as “abortion tourism,” something multiple states are already proposing. Yes, this is shocking, but there are other dynamics at play here such as politics and potential recruiting “benefits.”

But let’s not forget the REAL reason why companies are offering to help cover expenses related to abortion: MONEY. Abortion is cheaper than maternity care.

Once a woman has her baby, she goes on maternity leave. This leave costs the company both time and money as they have to fulfill the role, possibly even with a temp-hire who needs to be trained and equipped for the job.

On top of that, a woman can choose to stay home and raise her child, instead of re-entering the workforce. Her former employer must devote resources to finding a full-time hire to fulfill her role, train them, and equip them for the position.

With all of these efforts on behalf of the company, abortion is the easy way out – even if they have to blur a few moral and ethical lines to get there.

But even as we celebrate this huge victory, we need to remember that we cannot legislate the heart. By acknowledging that abortion is not a matter of law, but rather a heart and sin issue, we know that it will not go away.

Since abortion isn’t going away, now more than ever, it’s important to educate ourselves on the brutal reality of the abortion procedure. Here are the most common types of abortion and how they are performed:

Vacuum Aspiration Abortion (also known as a suction D&C): The baby is removed using a suction catheter inserted into the uterus. The remaining parts of the baby are then removed by scraping the lining of the uterus. This is performed during the first trimester.

D&E Abortion (also known as dilation and evacuation): An abortionist dilates the woman’s cervix and dismembers the baby, piece-by-piece, before removing it from the uterus. This is performed during the second trimester

Induction Abortion: An abortionist injects the preborn baby with a substance that causes a heart attack. When the baby dies, the woman is induced and delivers a stillborn baby. This is performed in the third trimester, which is also when a baby has a very high probability of surviving outside the womb.

Abortion Pills (also known as Chemical Abortion or Medical Abortion): A woman takes Mifepristone (RU-486), a pill that causes the death of a preborn baby through deprivation of blood and essential nourishment. Between one and two days later, that woman takes Misoprostol (also known as Cytotec), which causes contractions to expel the preborn baby from her womb. This is performed in the first trimester.

In some states, a woman no longer needs to visit a clinic. She merely makes a call to request abortion pills, with little to no verification required.

The abortion industry is working hard to make sure women can access abortion without ever seeing a doctor in person, or without even knowing how far along in their pregnancy they are (through a lab-certified test).

These abortionists are well-paid to snuff out a human life, the exact opposite of medical care, where a patient is diagnosed and hopefully healed. They see the preborn baby as a problem, and are handsomely rewarded to “resolve” it in the most “convenient” manner … no matter the safety and wellbeing of the woman.

Abortion isn’t going anywhere and is even becoming more accessible through the abortion pill.

What Does This All Mean?

As we see in Deuteronomy 12:31, and many other parts of the Bible, abortion and infanticide were done as acts of worship to false gods.

“You shall not worship the Lord your God in that way; for every abomination to the Lord which He hates they have done to their gods; for they burn even their sons and daughters in the fire to their gods.”

Empowering women to choose life for their preborn babies, and equipping them to be able to do so, is the role of Pregnancy Clinics around the nation. Yet the minions of satan have attacked these Clinics through vandalism and firebombs in the hopes of gaining more sacrifice under the guise of “reproductive rights.”

One of the best ways you can stand against these attacks is to intercede in prayer on the behalf of these Clinics so they are protected and able to continue the life-saving work that they do on a daily basis.

At Pre-Born!, we are committed to continuing to partner with Pregnancy Clinics to provide resources, equipment, and training and to encourage mothers to choose life. We ask that you join us today by sponsoring a life-saving ultrasound, which helps a mom choose life for her preborn baby.

More importantly, the ultimate answer to the issue of abortion is the life-changing message of the gospel of Jesus Christ. We know that our sin nature and brokenness is not addressed by law but by God’s Spirit. That is why Pre-Born!, is committed to reaching a woman who is scared, confused, and facing a major decision regarding the life of her preborn baby, and eternal life for herself. There is no true transformation apart from the mighty hand of Jesus.

We must continue to proclaim the gospel and the name of Jesus over the land.

Jesus, who Himself, came through an unplanned pregnancy, came to bring life and life more abundantly by seeking and saving the lost.

We ask that you join us as we continue to fight in the nation’s highest abortion states, both for life and the gospel. Now more than ever, there is a huge opportunity to reach many women and love them so they can experience TRUE freedom.

Let us never forget that change comes if we continue to put forth every effort to reach one woman and save one baby at a time. This issue is about real lives, real women, and real babies. We pray that you continue to help us make life and salvation a reality for many more moms and babies!